In Conversation With BC Golf President Michelle Collens 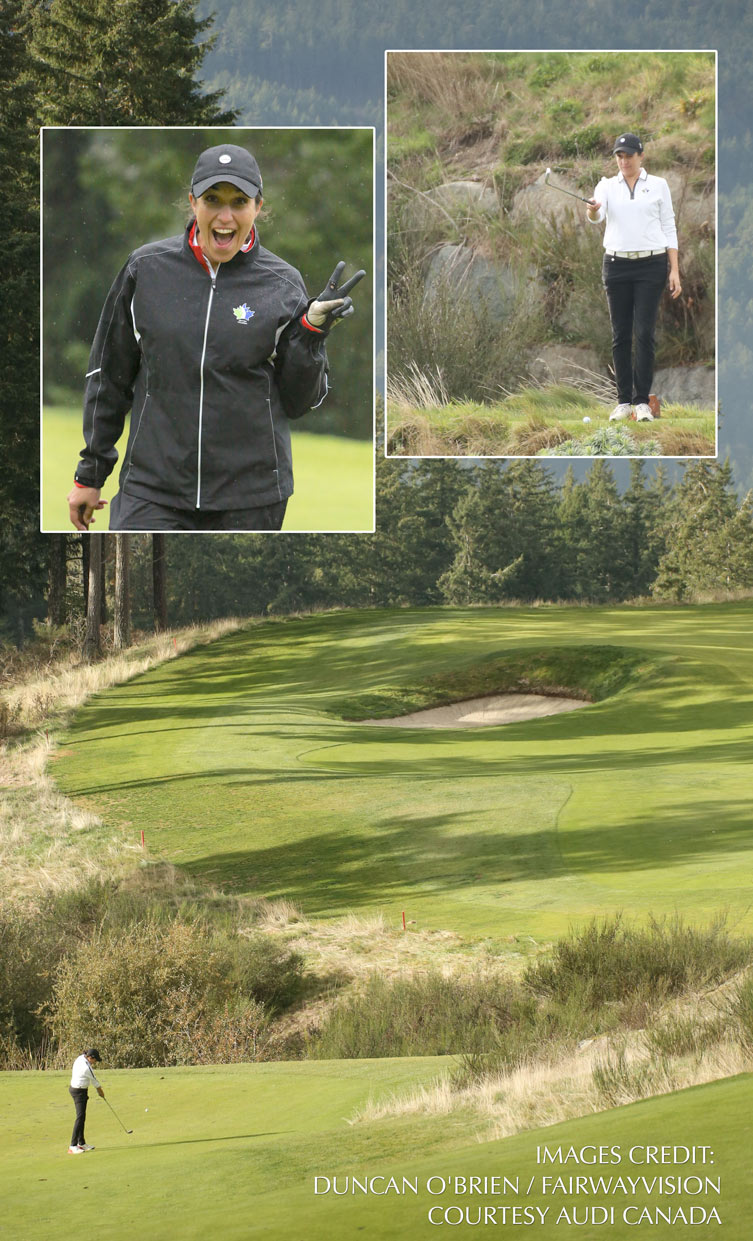 BC Golf Senior Contributor Brad Ziemer recently spoke with Michelle Collens who has sat on the British Columbia Golf’s board since 2013, the last two years as President...

You’re now deep into the back nine of your British Columbia Golf presidency. When you reflect on the past three years, what comes to mind?

I am really proud of the self-reflection we have done as an organization in the last three years or so. COVID has been a challenge we didn’t anticipate, but it has encouraged us to have better communication with our membership and to really take a pause to reflect on what we need to do. COVID has allowed us to become more focused on what we can control and what we are responsible for... It gave our staff more time to showcase what other opportunities BC Golf could be leading or doing beyond what we know we are really good at. 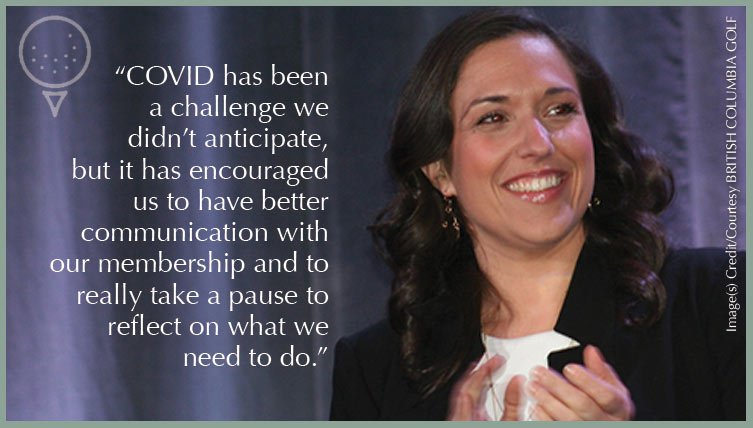 How has British Columbia Golf progressed with regard to gender equality over your tenure and where should it be going with its new strategic plan?

I would say that rather than just speaking amongst ourselves, we have reached out to [members] to understand what they are doing in that space. It is only in the last three years when COVID allowed it that we actually went out to [the] membership to explore. [In] my first year, we went to Victoria and did kind of a listening session instead of having meetings online or sitting in our offices and not understanding what is happening in the field. This past year, we went to Cranbrook to hear what it’s like in that region. That is where we spent a lot of time for the board to learn more and I think that can help the systemic change that we needed. 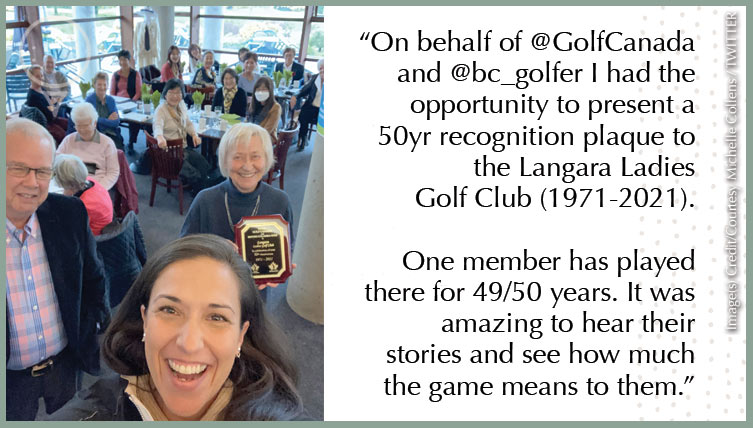 Also, some of the females joining the BC Golf board were not traditional golfers. It was a blend with those who do know the rules of the game and understand the traditions and how we need to operate. Wilda (Schab) is amazing because she understands the history, going back to before the amalgamation of the women’s and men’s associations, and I think it is important that we still have a voice that connects to the past. But we have new voices like myself and Shauna (Wilton) who can say, ‘Well, this is what I hear.’  I am more of that public player, while Shauna had joined Richmond Country Club and has experienced what it’s like for a female [to join] a club. They are very different experiences — someone who joined the game through a public course and someone who joined it at a traditional private course.

What are the biggest challenges when it comes to growing women’s golf?

I would say that as much as COVID has been a catalyst for the game, it has also presented challenges for growing the game for women. I say that respectfully because I understand the business models of the courses. BC Golf is not in control of how programs run at courses. With COVID, women’s clubs and leagues were often the first things to go. And those things are really important for women to find their place to play and to have it consistently. Men are fortunate in that they already have their golfing buddies. They can put their foursomes together. More men are members of private courses and can still have their men’s nights. I understand why public courses in different places had to say this is just going to be first-come, first-served, but we did, unfortunately, see a reduction in women’s nights. And it became really hard. Women were saying, ‘Where can we get a tee time?’ 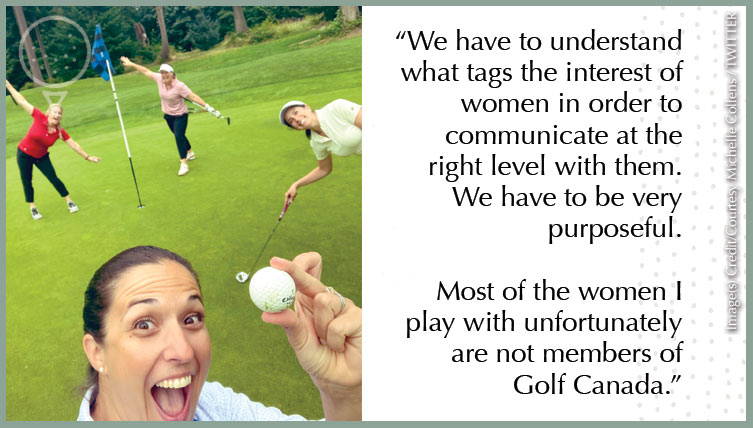 Collens Posting To Twitter In 2020 During A Round With Some Fellow UBC Thunderbird Alums At Her “Home” Course Of Northlands In North Vancouver, “… Got 2 Birdies, So They Told Me Tweet About It. Rolling On The Floor Laughing, Front-Facing Baby Chick Woman.”

What changes would you like to see that would help grow the number of women playing golf?

We have to understand what tags the interest of women in order to communicate at the right level with them. We have to be very purposeful. Most of the women I play with unfortunately are not members of Golf Canada. And I think that is because they have never been told what the benefits are. The main benefit for many is that you get a handicap, but having a sanctioned handicap is not a driving factor for many women. But once I explain to them that membership also got me insurance, or club replacement insurance, and had other benefits attached to it, that’s when they are like, ‘Oh really?’ I’d also like to see provincial associations and Golf Canada support commercial models like Golf & Tacos and Iron Lady that are helping to grow the women’s game. Let’s ask them what they need from us to help them grow. I really believe it is not duplicating efforts. It is championing those who are doing something well and then finding how we get their message out because they have already got the niche.

I’d also like to see provincial associations and Golf Canada support commercial models like Golf and Tacos and Iron Lady that are helping to grow the women’s game. Let’s ask them what they need from us to help them grow.

In your role as Senior Manager, Sport Hosting with the City of Vancouver, you interact with many different sports bodies. How would you equate the progress of golf, as a sport overall and BC Golf in particular, relative to gender equity?

I’m really proud of BC Golf and the leadership we can provide in this space supporting other PSOs. It was such an honour to be recognized by our peers at the 2019 Sport BC Awards as we were awarded the inaugural Delivering on Diversity Award for our commitment [to] advancing accessibility and inclusion in sport. Much of that effort focused on the inclusion of women in golf, but has since evolved to also be very purposeful and intentional in other diverse groups that help us stand behind the true meaning of ‘golf for all.’  We have [spent] time reflecting on what that phrase can mean, and what we can do better to advance opportunities for all golfers, or those that want to learn to golf. COVID has limited us in what we can do in the action phase to implement tactics. But I’m really happy and excited to see where we can go in the near future. It’s not about moving mountains to start; it’s about moving the rocks along the way so we can get to the mountains. 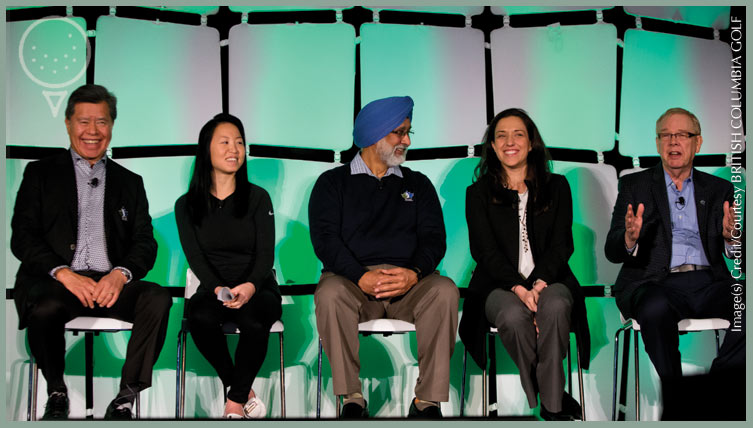 North American Golf Innovation Symposium Conference In Vancouver From 2017. The BC Golf board Discussing The Diversity Of Its Makeup Reflecting The Efforts To Address Diversity & Inclusion In The Game. (From Left) Patrick Kelly, Helen Jung, Jasvinder Dhaliwal, Michelle Collens & Kris Jonasson.

You have been candid about the fact you were not really a golf aficionado when you first became a member of the BC Golf Board of Directors. But like so many of us, you have become very passionate about the game. How is your game progressing?

I am going into year 3 of my learning curve of the game as opposed to the hobby. I have been playing [for] the last two years and I am excited to break 100. I think my best score last year was 98. This year is going to be all about strategy for me. [For] the last two years, I haven’t played with strategy at all. I have never thought much about specific shot selection in order to set me up better for success. I have always been just like, ‘Okay, this is how far I have to go, this is the club I should use, and just go.’ As opposed to looking ahead and saying you have a bunker here, you have a bunker there, you know which way your shots go so play safe, and maybe start to take down some strokes. Patrick Kelly (a former BC Golf president) has been telling me about this Dave Pelz guy, who is a short-game guru. So I bought his book and have spent part of my off-season reading it. I now have to transfer that to my practice. I am happy to say I am still very keen [on] trying to take my game to the next level. 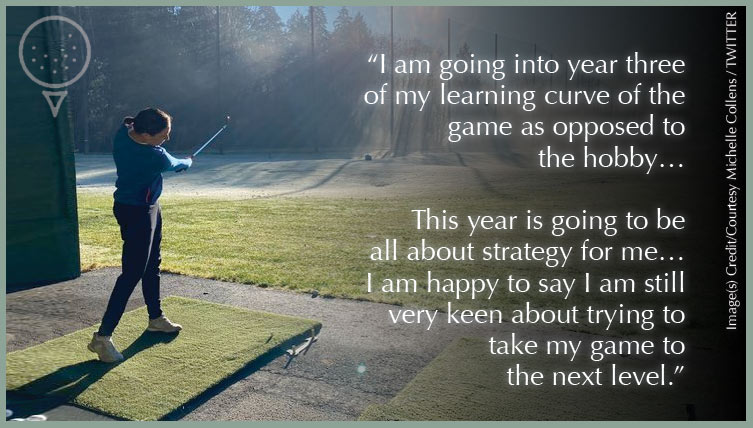 You set a goal of playing in a BC Golf championship by 2025. Are you on track to meet that goal? Any chance it could happen sooner than that?

Some people would say you could go earlier, but I think I am on track for what I said. I have not yet played in any kind of serious tournament. I have gone and observed tournaments so I now understand more about how a real competition is set up and run. I really want to explore my zone and see what type of friendly competition might be available there. My intention is to be back on the driving range in February and then [get] back on the course in March. 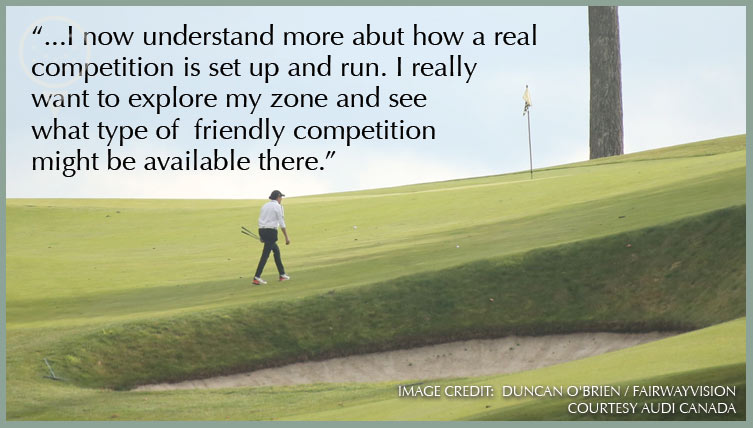